"On his new album, Jeff Rymes exhibits all the traits of the master songwriter." - William Michael Smith

Jeff Rymes’ former quartet The Lonesome Strangers originated in “the roots music explosion that took place in Southern California during the ‘80s” and have been described by AllMusic as “one of California's most influential bands.” Now, 20 years since the Strangers’ last release, Rymes has returned to serious musical pursuits with his solo debut, Even If The Sun Don’t Shine, picking up where he left off with a collection of songs from the highways and byways of life's road trip.

“It was a thrill to be back in Southern California making music. I felt like I was doing something new and reconnecting with the past at the same time,” says Rymes, who was encouraged by longtime friend and producer Taras Prodaniuk (Dwight Yoakam, Lucinda Williams) to record Even If The Sun Don’t Shine at SlideAway Studio in Shadow Hills. The 11 songs were cut in a decidedly “old school” manner on 2-inch analog tape and feature several contemporaries from Rymes’ Strangers days. A combination of camaraderie and creativity sparks the entire album, as Rymes’ reunion with recording plays more like a welcome home party, with the shared excitement of old friends getting back to the heart of American roots through a mix of compelling styles.

Rymes has recently relocated from Philadelphia to Portland, Oregon, recorded a lo-fi “companion CD” to Even If The Sun Don’t Shine, and has begun performing across the Pacific Northwest, both as a solo act and backed by various musicians, generally referred to as The Invisible Plastic Nashville Band. 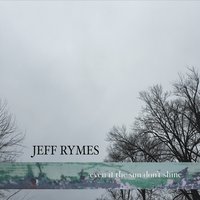